Though the Twin Towers will forever be ingrained in American culture, their architect and many of the themes he intended for the World Trade Centers’ design have been lost in the annals of history.

Japanese architect Minoru Yamasaki was a modernist who designed for human interaction. His designs might have been minimal, pared down, and somewhat cold, but life could fill them up. He preferred people to interior design too. As he once said: “If you have white walls, human beings look better in a room than if you have red walls.” Yamasaki, who designed the original World Trade Centers in 1973, is the subject of a new book called Sandfuture, out on September 14. The book traces his unconventional path in architecture, from his early life, born to Japanese immigrants in 1912, to his path in architecture, moving to New York City during the Great Depression.

Yamasaki was part of the New Formalism movement, which saw its rise in the 1950s, aiming for a monumental presence in modernist towers, with delicate details and a rich use of materials like marble and granite.

In 1955, he started his own firm, Yamasaki & Associates, which created 43 residential and commercial towers across the globe, from Brazil to Azerbaijan. Though his design accomplishments are awe-inspiring, he remains in the margins of design history.

The book’s author, Justin Beal, talks to AD about symbols of authoritarianism, bad reviews, and Yamasaki’s unique vision for the Twin Towers, which even today is still unknown.

Architectural Digest: How did you become enamored with the Twin Towers, and what do they represent to you?

Justin Beal: I studied architecture. It was summer of 2001, and I was obsessed with the Twin Towers. They were so beautiful to me as objects. It occurred to me I had no idea who designed them, even though I graduated from a rigorous architecture program.

AD: He isn’t a household name, like a Zaha Hadid or Frank Lloyd Wright. Your book aims to tell Yamasaki’s untold story. What did you want to shed light on?

JB: A lot of architects in New York didn’t know who he was. It made me reflect on how I was taught architectural history. It’s not just a consequence of racism, but that certainly had something do to with it. Architecture is a very white, privileged field. In many ways, Yamasaki was omitted from that story because he didn’t fit in. 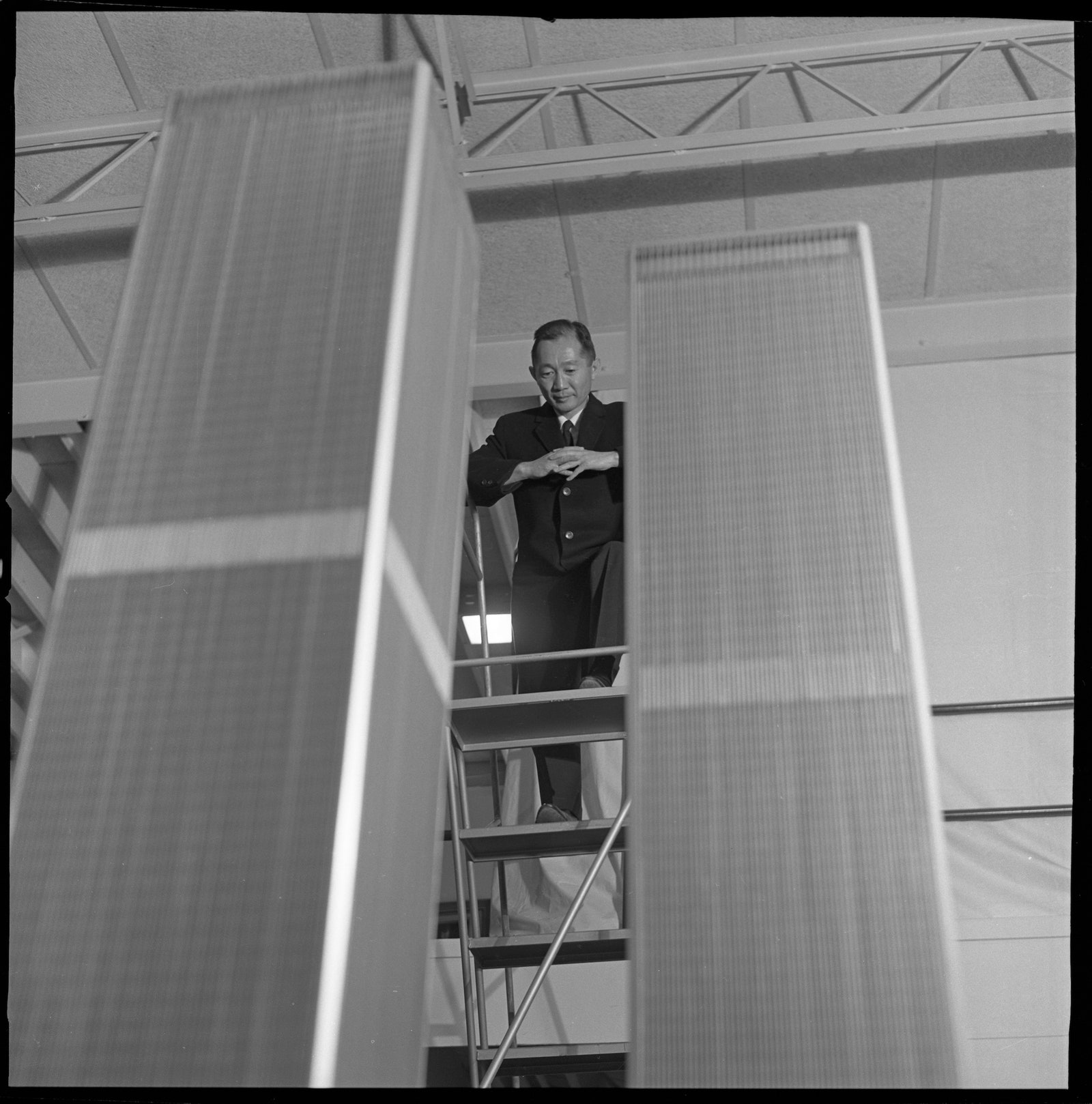 Yamasaki standing over models of the World Trade Centers.

AD: What made his life captivating, in your eyes?

JB: Major forces in 20th-century society impacted his life. After Pearl Harbor, everything changed. He continued to work as an architect, overseeing the design of a naval base in upstate New York but had to help his parents leave Seattle, so they didn’t get sent to internment camps in Idaho. They moved into his tiny apartment in New York City, while he was working for the government (the same government that imprisoned 120,000 Japanese Americans). It was a complicated dynamic to start his career. He had tremendous success after that, then suffered monumental failures later in his career. His story always touched on big forces and big themes.

AD: Why was he so controversial as an architect?

JB: When he got the job to create the World Trade Centers, he was on the cover of TIME. He was positioned to be a major figure. His critical reception was positive in the beginning but just got more negative over time. When you build the biggest building in the world, nobody knows what it will look like. It feels to me like nobody anticipated how overwhelmingly big those two buildings would feel.

AD: When the World Trade Centers were being built in the 1960s, what were people saying?

JB: When they were being built, they were hailed as this marvel of engineering, this incredible accomplishment they were built so high. When they were unveiled, people thought they were miraculous. But during that time, between 1962 and 1973, the politics and culture changed so drastically in the city. You can see the shift in the reception to being big symbols of government and bureaucracy, authoritarian power. You can see the shift in the critical reception of the buildings towards the end. There are all these metaphors for violence. They took on a sinister feeling.

AD: New York had its own recession in the 1970s—were the towers out of place or did people warm up to them?

JB: In the 1970s, after New York City almost went bankrupt, it remerged not as a city of industry, but as a real financial center. In the early 1980s, the building assumed a different identity: a symbol of finance and Wall Street. The buildings were on the cover of Bright Lights, Big City in 1983; they symbolized 1980s financial excess. There are all these transitions over what they represent over the decades.

AD: What was Yamasaki’s vision of the building?

JB: His vision of that building was to be a symbol of world trade. A symbol of world peace and cooperation. This idealistic, modernist language that from now, from a cynical post-millennial perspective sounds crazy. Like it was going to be this symbol of world harmony through trade. His approach to architecture was modernist, but he wanted to make modernism more human. More enjoyment needed to be reinserted into modernism.

AD: What was his greatest challenge?

JB: The World Trade Center isn’t representative of his larger body of work. It was a project that, when he was offered the job, he knew that it was something too big for his office, but it wasn’t something he could turn down because it was the biggest job in the world. There was a great struggle between him and the Port Authority cutting back costs to make something efficient.

AD: What was the critical reception like when they were first unveiled?

JB: They were criticized, but influential. Rem Koolhaas always celebrated them, even when they were criticized. People disowned the legacy of the World Trade Towers. The most emotionally devastating review was written by New York Times architecture critic Ada Louise Huxtable, who was a stalwart supporter of Yamasaki, even when others were skeptical of his practice. She was excited about the design, but gauged shifts in public opinion. He anticipated her support when the building opened. Her final review crushed him because she stood by his side for much of his career. He wrote her this seven-page rebuttal to her review.

May 18, 2022
Save
11 Ways Owners Can Make Construction Projects More Sustainable
More By Author